Once in a blue moon, some book’s premise triggers my curiosity so effectively I can’t resist. I. Need. To. Know. I need to know what happens and how it’s done. Mur Lafferty’s Six Wakes is one such story. 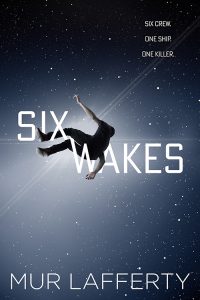 Dormire is a starship with six crew members on a long, long voyage. They all wake up in their cloning tanks with memory loss, while the ship is off course and their murdered former bodies are still floating around in zero gravity, because someone disabled the AI and the basic functions of the ship. One of them did this, but they can’t even trust themselves, because each and every one of them has no memories of the time leading up to the disaster.

I didn’t need to know more to start reading. It’s like playing the RPG Paranoia – you can’t trust anyone and keep staying on your toes. And it’s kind of a derailed cousin of Becky Chambers’ The Long Way to a Small, Angry Planet. While Angry Planet’s Wayfarer is full of fluff and love, and nothing much happens in an utterly adorable way, Six Wakes’ Dormire houses an equally diverse crew (not as colorful, because no aliens), but it’s full of suspicion and flaring tempers, and ALL THE THINGS happen. The whirlwind plot cycles through the characters, the pacing is relentless, and your suspicions shift along with the crew’s. Before long, you expect this dysfunctional team to rush into another killing spree any minute instead of working together to save the ship.

Gradually, the story transcends the fundamental Whodunnit premise and ends up asking questions about cloning ethics and forgiveness. There are even some echoes of Nancy Kress’ Beggars in Spain when you learn about the development of mankind under the influence of cloning. And then to read in the afterword that it all started as an FTL fan fic warmed my gamer heart, although I never would have guessed.

Six Wakes offers no easy camaraderie and feel-good vibes, but an interesting bunch of troubled characters in a dire, dire situation, and the revelation that comfort food helps even in space. 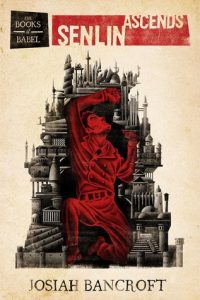