New novelette: When We Were Starless

My new novelette When We Were Starless was published in the October issue of Clarkesworld, and I wanted to provide a little bit of trivia and background for readers with an interest in such things. There may be mild spoilers. If you want to read the story first, here it is – you could go chasin’ ghosts among the ruins of a fallen world with Mink right now! 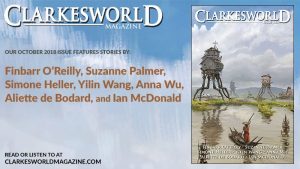 It is my second story set in a world I call the Shrouded Earth. It’s not a direct sequel to How Bees Fly, but they follow a shared trajectory, and WWWS holds some spoilers for things that are revealed in the course of HBF.

When We Were Starless had a rough start. I was struggling with what felt like the certain knowledge that my first story had been a fluke, and I wasn’t convinced it would be a good idea to revisit this world. But the image that stuck with me was nomad herders with 3D printer spiders!!! I imagined a trickster story first, about a stranger shaking the tribe up and inducing change, before leaving them again. It took me some time to realize I didn’t want another outcast story. So the only thing I kept was Mink’s ability to change her color. The trickster goddess whom this would have been attributed to (as well as the ability to drop tails) sadly had to go.

My main source for research was Vanishing Footprints: Nomadic People Speak by Ann Perry and Anthony Swift (not a perfect book, but it makes an effort to feature the voices of nomadic people). As I figured out the plot, I visited a planetarium (for the first time ever!). Huge parts of the story clicked into place while I was there. 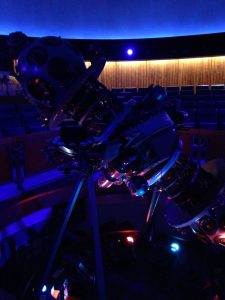 Nikolaus-Kopernikus-Planetarium, Nuremberg: For a very brief moment, I thought this might be the ghost Mink meets …

There are some direct inspirations: part of the opening was inspired by the framing narrative of Clifford D. Simak’s City; and when I began to think about the exhibits in the dome, I couldn’t resist the urge to write a happy ending for xkcd’s super sad Mars Rover episode.

The music was a happy accident, more or less: I always envisioned Mink’s people as musical, but the strong focus on music snuck into the text almost without me noticing. The moment I found out how it would play into the ending, I knew I could make this story work. I also listened to a lot of music and have my own Paean of Manifest Horizons (more of a Paean of Manifest Finishing Line, because it took me forever to get there …).

Last but not least: Many thanks for encouraging me, and your brilliant ideas and editorial help, to Juliana Socher, Maike Claussnitzer, Catherine Brennan, Miriah Hetherington, and Sonia Focke! <3 And thank you, Clarkesworld, for publishing me a second time!
And thank you, readers, for spending time with my stories! Your comments, shares, and reviews mean the world to me!

There might be more of what I secretly call lizardpunk coming up at one point, more Shrouded Earth to unveil – or maybe space nomads? Or something else altogether. I’m not decided yet. Gotta go writing now to find out which egg will hatch next (or, you know, at all)!