I learned only yesterday that the world of pen & paper role-playing, or rather the world of speculative fiction, has recently lost Terry K. Amthor. He has been one of my favorite creators and a strong influence. His work made me gaze upon science fiction with a fantasy mindset and vice versa, and opened my eyes to the wild possibilities the genre has to offer.

There are better places to read up on Terry’s long and significant history in rpgs, mostly with Iron Crown Enterprises (for example this interview). I’m not too much of a regular role-player myself, but of all the places I’ve adventured in, Shadow World is the one I keep coming back to. It’s a world of darkness, but also a rainbow of colors, a realm of high fantasy in the best sense, where everything is possible, or at least was possible once and left its imprint. And most of all it opens up room for the imagination to soar, and provides a lot of breathing space for the audience’s minds to work their own magic.

Detail-obsessed worldbuilding can be one of the duller aspects of speculative fiction, but while Terry was a true and dedicated worldbuilder, his creation always offered a fresh perspective. He worked on MERP earlier and was deeply immersed in Middle-earth, so the Tolkien influence is strongly visible on Shadow World, in its languages, in its myths bleeding into the present age, in the hierarchy of all things living. It transcended these roots, adding lots of powerful women, queer culture, and people of color not only in some “exotic” background settings. Many varied cultures exist in parallel, interweaving at points, and many forces shape this world. It started out distinctly 80s-flavored, but 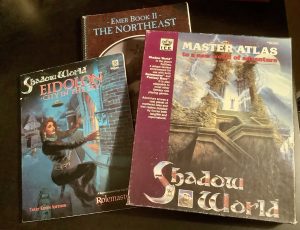 has always been more diverse in ways high fantasy (rpgs) at this time simply weren’t. And it has been developed to be ever more so, because Terry stayed, uncovering bits and pieces, telling the story, the multitude of histories and seeds and glimpses that made his world come alive.

Shadow World has constantly opened up my perception of what fantasy could be, has razed so many of the limits I once might have seen, and has never, ever failed to show me something wonderful. That’s why I felt I had to toast Randæ and Andraax yesterday, but I guess my favorite Loremaster of them all is Terry after all.

Life Beyond Us anthology

Entry #1: The Musicality of Language with Eugenia Triantafyllou