Murderbot does what it says on the tin (although it doesn’t say ‘Murderbot’ on its tin, it says SecUnit, and Murderbot is just the not-so-ironic nom de guerre it chose for itself): It’s a bot intimidatingly apt at deploying the array of weapons at its disposal. Murderbot is also pretending to be a normal android slave, even though it has attained free will. And it’s addicted to binge-watching a cheesy show called Sanctuary Moon.

If this isn’t the stuff good stories are made of, I don’t know what is. 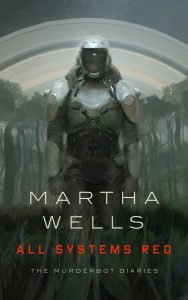 Martha Wells has been a staple of my reading life and a long-time favorite of mine. Somehow I had filed her mostly as a fantasy author, although her fantasy novels often include SF elements such as lost technology or steampunk contraptions. All Systems Red is fully-fledged SF, with strong characterization and a fascinating style and POV. Murderbot tells us of its own adventures, and it speaks to the part of us that is withdrawn, socially awkward and needs its alone time (a lot of it, actually).

All Systems Red is written with all the thoughtfulness and empathy of a truly modern SF tale and fits in with other feel-good SF adventures of our time – we join a diverse group of scientists on a planet survey, and they simply like each other and are nice people. And while the plot revolves around something less nice harassing Murderbot’s clients (leading to some biting commentary on capitalism, which turns its deadly side on the protagonists, too), the inner struggle of Murderbot is far more important.

It is a story about truly accepting free will in another – maybe odd – life form, with all consequences. Good intentions may not be good enough, and changing attitudes is always a struggle on both sides. I loved how these themes are tackled in All Systems Red. It comes with a solid adventure story, not too complicated, because it is a novella you can read in one sitting, and features some shiny nuggets of worldbuilding (hey, it’s Martha Wells; she’s a master worldbuilder).

All Systems Red is framed as The Murderbot Diaries 1, and I’m already waiting for the next installment like it was an unwatched episode of Sanctuary Moon.